Hi, welcome to a report on my final year project on digital image processing at University of Burdwan. If you’re already familiar with the subject, you might want to peek into our work here.

After months of working out on ideas under our mentor, we looked into developing a novel algorithm for performing Density-based spatial clustering of applications with noise (DBSCAN) for image clustering.

DBSCAN is a data clustering algorithm proposed by Martin Ester, Hans-Peter Kriegel, Jörg Sander and Xiaowei Xu in 1996. It is a density-based clustering algorithm which finds a number of clusters starting from the estimated density distribution of corresponding nodes. The definition of DBSCAN is a cluster based on the notion of density reachability.

Through the project, we proposed a novel algorithm by modifying the existing DBSCAN algorithm for image processing. We devised an algorithm which will make DBSCAN insensitive to clustering parameters (MinPts and Eps). Moreover, it allows us to handle image data with varying densities with ease. The proposed algorithm works as follows:

The varying density regions represent varying clusters with center points for each cluster as determined in previous steps.

Cons of conventional method of DBSCAN

Our algorithm’s advantage over existing algorithm

Using our proposed algorithm, we are able to eliminate the following demerits of conventional DBSCAN.

Results from our algorithm

Here, we find that the novel DBSCAN algorithm is successfully able to create clusters in the input image without using any parameters which can alter the results otherwise. This is useful as this algorithm is not sensitive to any parameters. Also, there are no random initial points as in KMeans clustering which makes the algorithm return consistent results. 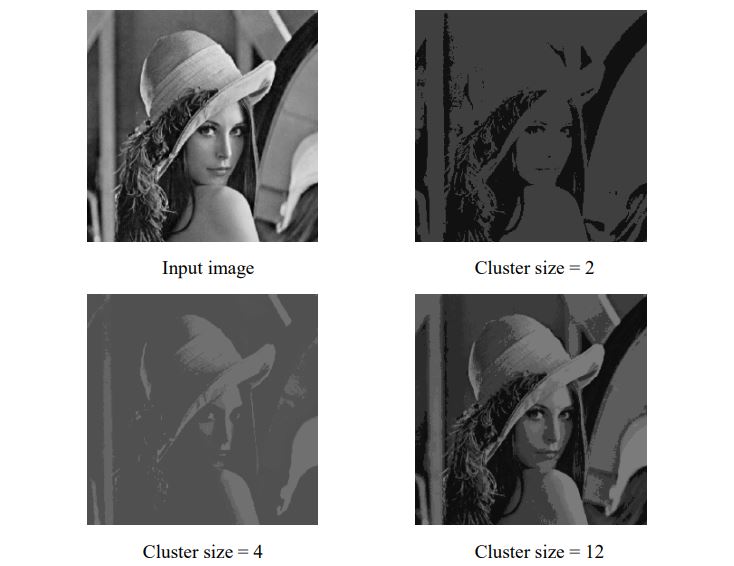 The errors in determining regions of varying densities are eliminated in the novel algorithm of DBSCAN as the algorithm correctly clusters the edges differently as the regions of high varying density. The overall image appears gray because, most of the image is illuminated with similar gray value and hence the dark regions denote another cluster. Also, there are some gray intensity regions in the clustered image which relates to hair and noise.